Monkeys are not gentle at all.

Why would I start my travelogue about one of the so called, most haunted places in India with monkeys? Well, allow me to tell you a thrilling story of coming across one of my wildest fears.

Bhangarh, for me is a place that tourists visit for their cheap thrills and weekend escapades. Being six hours away from Delhi, it is easy to travel overnight on Friday and be back home by Saturday evening or Sunday morning.

Unless you have a travel plan gone badly wrong, Bhangarh is a very chilled out destination. 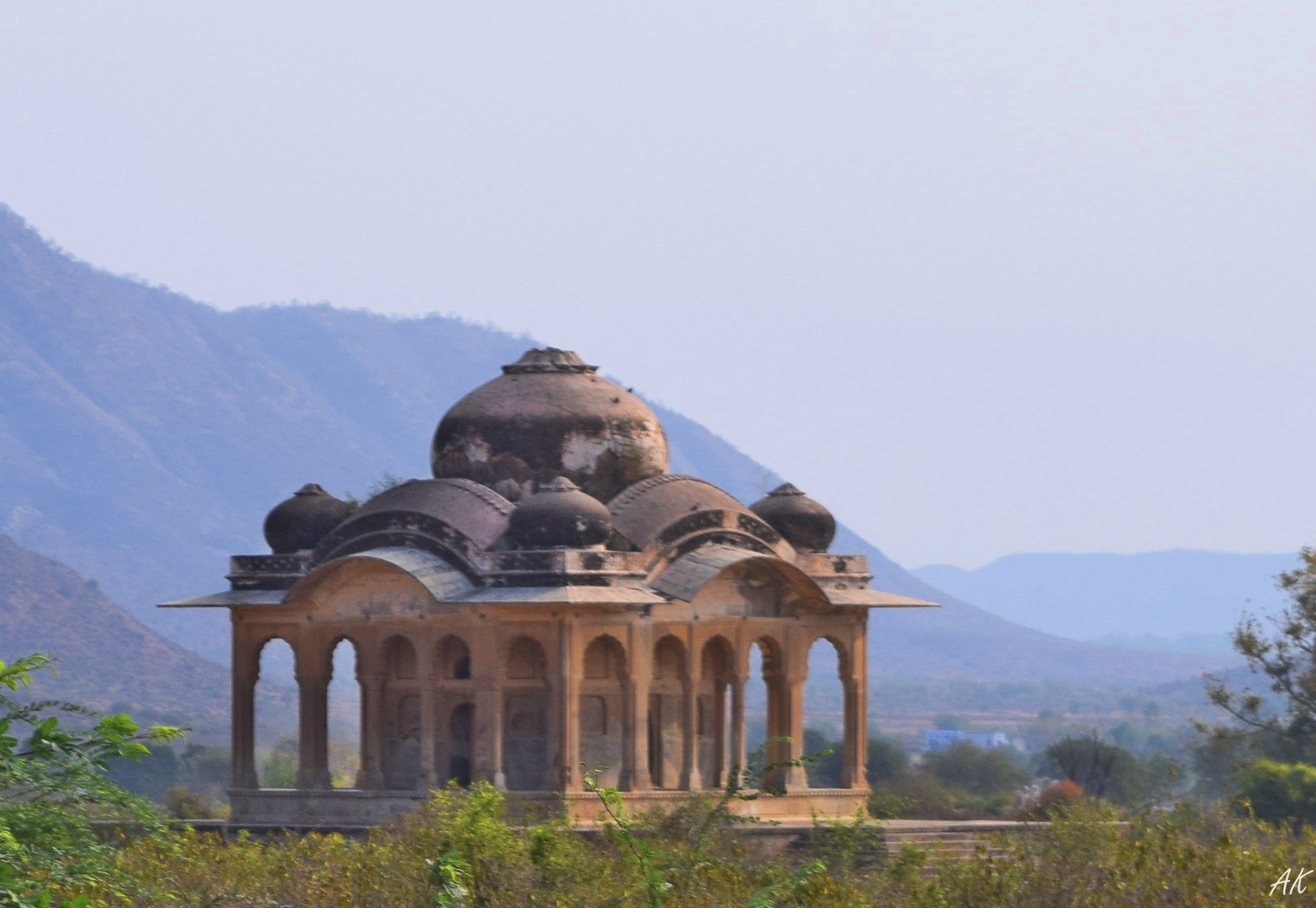 The first time when I was in Bhangarh, it took me an entire day to understand the route to the haunted city. In 2015, I solo traveled to Bhangarh after I got bored of Jaipur Lit. Fest. I reached Dausa on an early morning and later Gola ka Baaz which is the nearest village located near Bhangarh.

If Rajasthan is known for its street food for dirt cheap prices, Gola ka Baaz takes it to a whole new level. I was famished and the moment I got down from the bus, I ran for the nearest dhaba selling kachori & sabzi. A plate of 2 kachori and sumptuous sabzi costed me 12 bucks. That is like half the price of what we get in Delhi or even Jaipur.

An auto wala agreed to drop me at Bhangarh, I was expecting some kind of filmy moment where he would drop me and then run away. But, instead he said that he’ll wait unless he finds another customer.

They say that the moment you cross the gates of Bhangarh, a chill runs down your spine making you feel a presence lurking around

It was a cold morning in the month of January. No ghost in the world would be able to send any more chills down any part of my body.

Bhangarh looks like it used to be a well developed township with a thriving trade scene. The fort overlooks the township and you have to walk through a pavement with broken houses on the both sides to reach here. Bhangarh is said to be destroyed as a result of a curse laid by a tantrik who was somehow offended by the rulers of the kingdom. The most interesting part of this devastation is that all the houses are destroyed in a similar pattern. The top floor is broken and the floor below has no walls.

I was walking towards the fort, clicking pictures, when I saw a family of monkeys chilling out. Bhangarh exists in the wilderness, Sariska National Park is a few kilometers away from here and often foxes, jackals and hyenas walk into this area. The monkeys here are way different than the ones I have encountered in the mountains. While I was clicking the photos of my ancestors, one of them jumped right in front of me from its resting spot. He shouted as if he was very much offended by what I had done. He screamed again, I ran. I ran faster than Ussain Bolt.

I WAS RUNNING IN BHANGARH SCREAMING MY GUTS OUT. I didn’t even look behind to make sure if he was still following me. Maybe he wanted me to share his pictures on Facebook.

While I was screaming and shouting, I saw three girls standing at a distance laughing at me. Till now, there was no tourist in sight, and they appeared the moment I ended up embarrassing myself. I ran into a guard, he gave me a look of pity. He enquired about my friends. After telling him that I am traveling alone, his pitied glances increased. I am damn sure that if given a chance he would have laughed rolling on that dirty pavement but since he was a professional, he saved the story later. May be he would talk it over his late night drinks with other guard friends, telling them tale of the tourists who got scared because of the monkeys of Bhangarh.

The guard dropped me to the entrance of the fort, I asked for him number in case there were other monkeys but he simply walked away. Over the course of time, I kept running into those girls, I was sure that their Bhangarh visit was worth all the pain and effort by now. Bole toh ekdum paisa wasool trip.

Bhangarh fort is divided into a number of sections. You climb the first floor and come across two halls occupied by bats. Other than this section, there is nothing haunted about the place. Surrounded by the Aravalli hills, Bhangarh looks beautiful. It is said that Bhangarh fort was protected by a tantrik, who asked for a pledge from the king that the shadow of his fort would never fall on his hut. The day it happens, the town will be destroyed by his curse. The king ignored and kept on adding new floors on the fort. Finally one day the shadow of the fort reached the tantrik’s hut and Bhangarh turned into ruins.

The tantrik’s hut is still there on the top of the hill and you can trek upto that place. I had enough horrors for the day, was in no mood to climb up a hill and increase my pain.

The top of the Bhangarh fort overlooks the entire region and presents pristine view of the township and the surrounding forest area.

It was 9 and the tourists started dropping in. I am sure, if there were any ghosts here in Bhangarh, they had already fled away from the fear of these tourists. Loud music, noises and chatters soon filled the place. I felt sorry for the ghosts living here, even the monkeys had fled to their safe spots sensing that trouble has arrived.

I was later joined with a group of travelers who were planning to stay overnight in the fort campus. This was the last thrill I could experience in the ghost town of Bhangarh but three members of their group decided to back off and the plan canceled. I had to leave for Jaipur, unknown of the fact that Alwar is nearby and from there I can reach Delhi by evening.

In April 2016, I traveled to Bhangarh again with a solo traveling friend. Same pavement, same tourists  and the mountains. Time stops here at Bhangarh. Thanks to the monkeys of Bhangarh, I have an additional experience of this ghost town that no one else could have.

How to Reach Bhangarh – You can travel to Bhangarh via Jaipur or Alwar. From either locations, you can travel to Gole Ka Baaz and later find a ride to Bhangarh. From Jaipur, there is no direct bus to Gole ka Baaz, so you can find one at Dausa. The legendary Abaneri Stepwell is also located near Dausa.

Highway on my Plate: End of an inspiration