The last time I went to attend Holi Festival, it was in Mathura. Hundreds and thousands of Instagram photos tempted me to go, be a part of this festival, see the bash of colours by myself. But when I reached there I realized that Mathura Holi is nothing but a galore of eve teasing and hooliganism being practiced by locals and tourists alike. I hated every moment of it and decided never to go attend a Holi festival ever again.

But then a year or two went by and I got to learn about Shantiniketan’s Holi or as they call it, Basanta Utsav of Shantiniketan. The festival has a more historical value in Indian culture than we know about it. Some people convinced me to be a part of the event and it took almost six months of planning to finally be there. 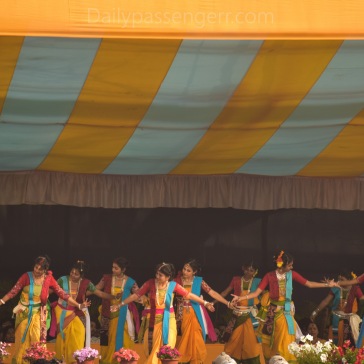 You see, Bengalis are really passionate about their festivals. A simpleton North Indian like me will only know about Durga Puja but there are other festivals that are celebrated with the same zeal and enthusiasm. I will write about another festival soon but let’s focu on Shantiniketan Holi for now.

It was December when I decided to go attend Holi in Shantiniketan. In December, all hotels on every travel portal were full. There was no budget hotel in Bolpur left for booking. I couldn’t find a single airbnb around Bolpur and Shantiniketan. I finally went to Couchsurfing and realized that everyone had fixed their hosts for months in advance. 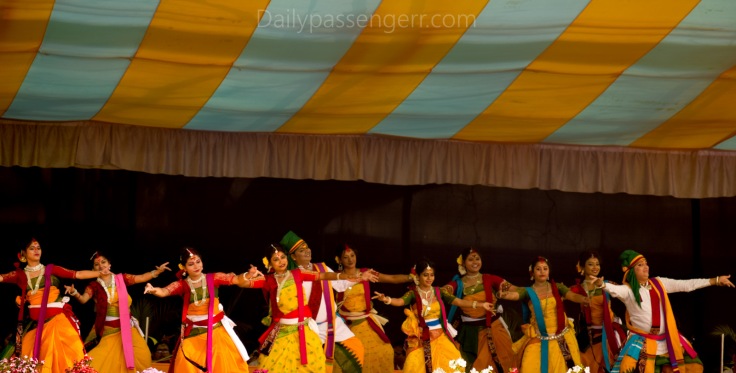 So I booked a hotel n Burdhawan or Burdhaman, stayed there for a night and then took a train to Bolpur which is only an hour away from here. I reach Bolpur with hundreds of singing and dancing folks who had acquired a similar strategy to travel till the venue. When we reached Bolpur, the scene was totally different. There was a flood of people, but unlike Mathura, everyone was walking in a certain synchronized way giving way to vehicles. 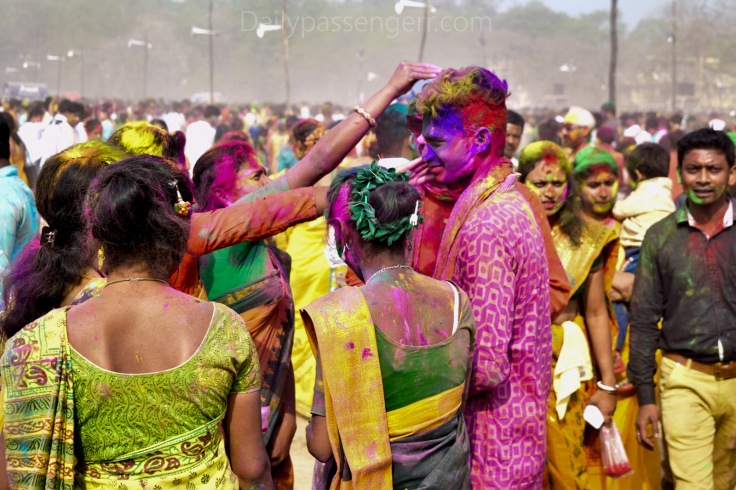 I don’t know how I reached Shantiniketan but I am sure it took a lot of walking. From a point where the festival venue was supposed to be reached on foot, the crowd only increased. But to my surprise, no one was pushing anyone. Everyone was happy high, singing still, pouring colours on each other, walking patiently.

Shantiniketan is located in Bolpur region of the Birbhum district. The town is 200 km away from Kolkata and was formerly known as Bhubandanga. This place was the foundation ground for Nirakar Brahma, founded by Maharshi Devendranath Tagore. Later Rabindranath Tagore. followed his footsteps and founded several institutions. It was Rabindranath who started the tradition of playing colours in springtime.

This is when I had a sudden realization. Everyone at the venue was in Kurtas and traditional dress, I on the other hand was out of place wearing a Captain America t-shirt.

There are barriers, behind which audience are sitting. People have been around since 4 in the morning waiting to find a place in the crowd. Performance is happening at a distance and I am cursing myself for not having a Zoom lens. I click some photos then realize that a majority of action is happening around the ground. People have formed their groups and are dancing, singing and playing colours.

I walk around the ground, take some quick videos and photos when some pretty Bengali girls come to me and add colour to my clean looking face. Jeewan Safal moment :D.

The most interesting thing about Shantiniketan Holi was that it was not vulgur like the ones I have attended in Mathura and Pushkar. Here, colours were put on after asking and if someone seemed uncomfortable, they were not forced to the notion of ‘bura na mano holi hai’ jingo.

Basanta Utsav (the festival of the spring) is the name for Holi in Bengali. The festival has a clear dominance of the yellow and red colours that are used everywhere from decorations, attire and splash. 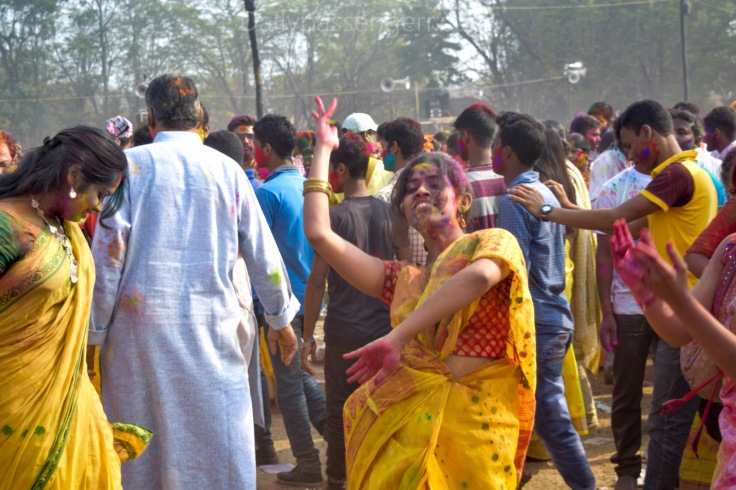 Soon the sun went on the head and I decided to return back to Bardhaman. Shantiniketan Holi was a fun experience that could have been better if I had known about the dates and ways to find a accommodation at a nearer place.

How to reach Shantiniketan

Shantiniketan is 3 hours away from Howarah Station and an hour away from Bardhaman city. During holi, it is difficult to find an accommodation in the town so most people stay in Bardhaman itself.

How to plan for holi in Shantiniketan

Holi or Basantotsav in Shantiniketan is a three day affair that starts two days before Holi festival. Make sure that you have advance booking for hotels in Bardhaman or if lucky then in Bolpur itself. Attend at-least two days of the festival because it will give you a glimpse of the event in the most amazing way.

16 thoughts on “Basant Utsav at Shantiniketan”