It is amazing how some places thrive with natural beauty despite the ongoing destruction around us. Experiencing something unique for an hour or two becomes such a privilege, no matter how insignificant it is for others.

My friends from Shimla don’t talk highly of the Toy Train. They prefer the villages of Kufri and Mashobra rather than recommending you a seven hour toy train ride from Shimla to Kalka. For me, as a traveler, this toy train is nothing but a unique experience. Here’s a glimpse of what I saw.

I had returned from Narkanda after my semi-successful trek to Hatu Peak. It was raining again, I felt as if I’ll miss my train.

I reached Shimla station after getting attacked by a monkey (story later, or maybe never). Clouds hovering over the hills in the background created a mellow effect. It was a perfect day to travel.

For a hill town, Shimla is growing at such a rapid speed that one can only wonder and feel disgusted at what tourism industry can do to a place once known for its colonial charms.

The train left Shimla, an old couple sat next to me. I had a feeling that they’ll sure stop me from opening the window and clicking pictures, but they didn’t. We enter a pine forest. Looking at the height of the trees, it seems like they are ages old. The breeze made me happy, was not so sure about the couple sitting next to me.

Beautiful sights of the wilderness surrounding Shimla, tall pine trees, green valley makes the ride look so wonderful. No wonder the British chose this place as their summer capital.

The lovely landscapes create an ephemeral setting. A sight passes by, another emerges. At one point we enter a cave, at another moment we are next to a valley filled with dense forest. The clouds travel with us, leaving us spellbound.

The uncle looked kind of uncomfortable but aunty started participating and showing me good view points. She had been to Shimla before; second honeymoon eh! 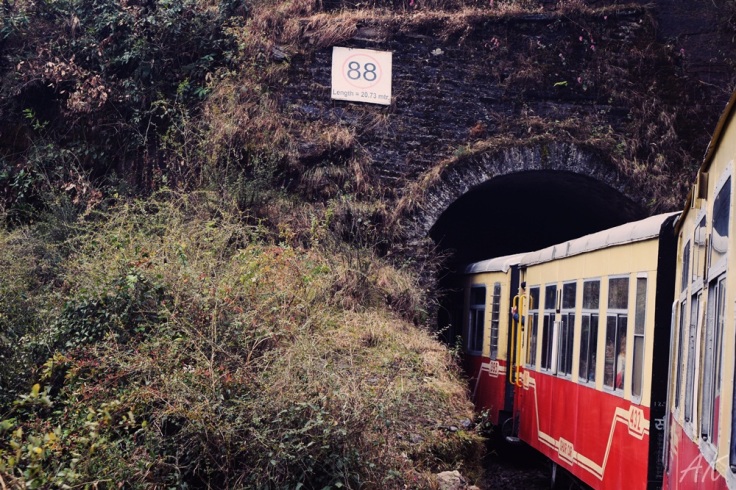 A motley group of tourists couldn’t stop screaming at every tunnel. The toy train passes through some 102 tunnels. I wondered if they had continued, they would have lost their vocal cords by the time we reached Kalka.

The train passed from a station to another, entered a tunnel after another, towns and valleys played hide and seek along the tracks. Everything about the toy trains is a series of magical moments in transience.

After a seven hour ride to we were standing in Kalka, the journey ended, we dispersed for our next destination.

For me, I had a train for Delhi waiting at the next platform.

Information – There are 5 toy trains running in Shimla out of which the early morning trains are the most recommended ones. Make sure that your train reaches Kalka by 3:30 or 4:00 so that you can catch the connecting train for Chandigarh or Delhi. Toy trains are divided by class, some trains serve meals while others don’t. Make sure that you book your tickets in advance, otherwise it might be a problem making booking on spot.