Meghalaya is one of the most beautiful places I have ever been to. The land of highest rainfall is also the land of smiling people. This small hamlet whose entire population and area is smaller than Andheri in Mumbai has learned to live closer to nature setting an example for rest of the world.

You visit Meghalaya to experience the beauty of this place. While driving from Guwahati towards Shillong one can see paddy fields on both sides of the road. The occasional rain reminds you that you are coming closer to the wettest place in the country.

Cherrapunjee is one place that every school student who has read their Geography is familiar with. Cherrapunjee receives the 2nd highest rainfall in the country. A few kilometers from Cherrapuni lies Nongariat that has been declared as a world heritage site by UNESCO. This small village is the home of living root bridges.

About 200 years ago Khasi tribes learned an ingenious way to connect roads blocked by rivers and streams. They changed path of roots of rubber tree by pipes and finally connecting roots of two trees on either side of river that finally connected in the center of their path. It took 15 to 20 years for a root bridge to grow and strengthen. These natural bridges are so strong that they can take weight of 10 to 20 people at a time.

Reaching these bridges is not an easy task as it requires crossing a narrow steel bridge, climbing a number of stairs and trudging a tiring uphill path. This 7 kilometer trek requires high level of stamina. The whole journey toward the bridge feels like entering a fairyland with beautiful views and scenes on the way. 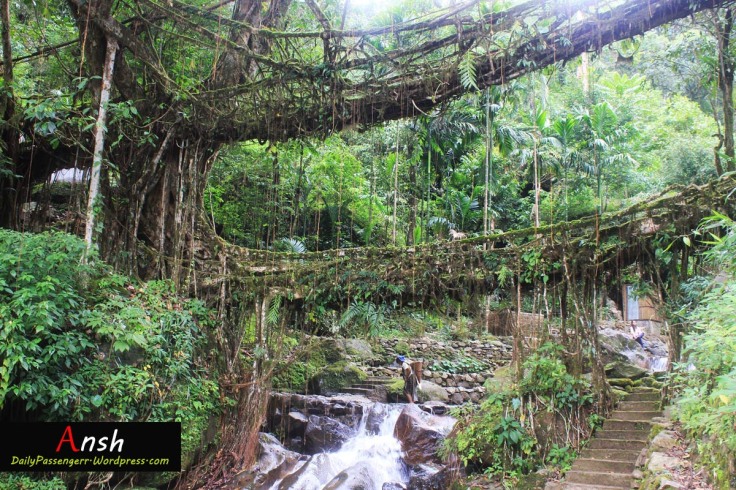 The walk would be difficult, I was oblivious to this.

I reached Cherrapunjee in middle of heavy rain. Twice my shared cab got stuck at places in middle of nowhere and I was only able to reach there by late evening. Meghalaya is a lazy state. Everything closes down by 8 PM. The worst part is looking for a guest house past evening. The driver was helpful, he got me a place to stay for the night at his friend’s place. Next morning he told me a few places where I could enquire about a trek down to Nongariat.

I found a local guide who asked me for a 1000 bucks to take me there. Doesn’t matter how awesome the place is, in no condition was I going to spend a 1000 bucks on it. But I had to go anyway.

It’s a good thing that people are not money minded in these regions. May be the reason behind this is that the Khasi community is matriarchal. Finally someone guided me to a tempo stand and told me to hop on the ride. I reached a small nameless village expecting that I’ll be in between of the root bridges.

Again after asking around I was told that I’ll have to walk down for 7 kilometers to reach Nongariat. The moment of realization hit me just after I saw the pathway leading to my destination. In a way it looked beautiful and yet I felt such dread, like peace and chaos merged into one and formed something beautiful. I started walking when the guy who told me the directions called me from behind. ‘Okela hai? (are you alone)’ He asked me. In agreement I nodded my head. ‘Udhor mot jao, okela jaega bhula jaega.’ (if you go alone you might get lost). Hesitantly I asked him if he would join me but he refused. He told me to wait for a while as other tourists keep coming down here and then vanished.

I didn’t have to wait for long; I saw a group of girls with a guide coming my way. I acted like a photographer while they passed me and then without wasting a moment I started following them. While walking behind them I felt kind of awkward. Following a group of big eyed Bong girls didn’t seem like a good idea at all. More than the fear of the trek, the fear of getting beaten up by strangers started to run in my head.

The part of trek is to cross a narrow metal bridge that was capable of scaring shit out of even an adventurer like me. This is the final point of your destination. You come across the first root bridge while spotting rare birds and insects. These bridges are alive and Khasis have named them individually. The longest one is called Ritymmen and the oldest one is Umshiang.

While the girls behind me started screaming and jumping at the sight I decided to sit at a corner and watch this beauty. Awestruck I was, my tiredness was gone and I decided to surrender myself to the serenity of the place.

In the process I realized that I hadn’t brought anything to eat. I was starving and the only remaining bottle of water had a few drops remaining. I was trying to avoid the girls, while looking for other bridges but somehow I kept coming in front of them. Getting beaten up at this far most location sounded like a real bad idea.

Returning from this place was another dreading experience. When your mind and soul is stuck at a place your body refuses to move. The path seemed longer and hunger panged inside me. I was a fool for not carrying anything with me.

If I had to go visit this place next time or suggest it to someone for a trip down there I’d give them a few notes.

While exploring the area I came across a small shop selling munchies. My happiness level reached 100x. After a quick snack and I started running around the place, found a few more gorgeous bridges and again ran into the girls. 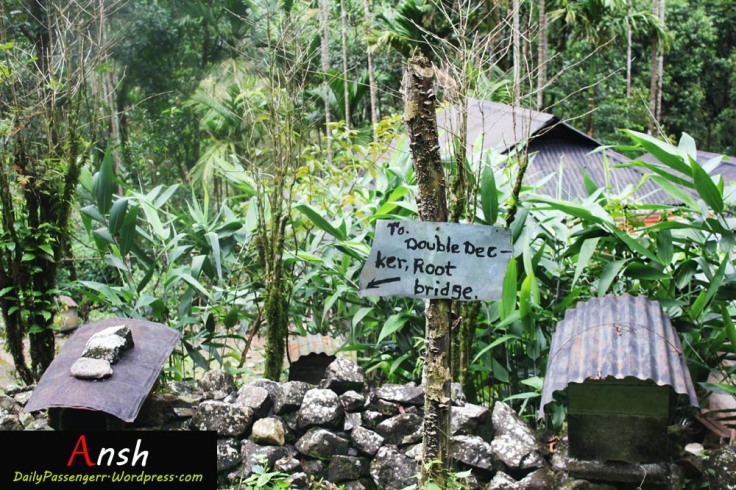 The way back was tough, I wished I could stay but as soon the place started to get crowded by other tourists and I decided that it was time to leave. I reached Cherrapunjee by evening and was welcomed by another shower of rain. It was my time to leave.

Next morning when I woke up, started looking for a tempo for Mawlynnong and I ran into those girls again. A few smiles were exchanged before we left on our separate paths.