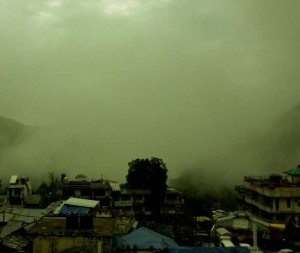 I returned home from Chennai after catching Measles and was recovering at home when a friend shifted to Mecleodganj for a month and started posting pictures and updates about the place. I wanted to see Mecloedganj the way Abhinav used to describe and he was one of the few people I wanted to travel with.

Recovering at home the urge to be in Mecleodganj kept on increasing, the more Abhinav used to describe the more my mind used to wander there without wanting to come back. Finally I decided to visit Mecloedganj in the end of May and I left for Delhi by train.

I traveled from Patna to Delhi in a hot summer afternoon that was simply intolerable. Keeping hopes that I am going on the mountains and this struggle will be worth it I reach Delhi. The moment I stepped in Delhi there was a huge thunderstorm and the entire city was engulfed in darkness in middle of the afternoon.

I normally take these events as signs to do something or not and I was badly convinced to drop my plans to Mecleodganj for a day but then I had no place to stay in Delhi either. Somehow when the rains stopped I left for Kashmere gate, confident that I’ll catch a bus for Dharamsala like last time.

But I had no idea that half of Delhi will be traveling there because 1. It rained and 2. Weekend was coming.

For now my mind was screwed, I was running from a place to another calculating other routes that I could take via Jalandhar or Pathankot and in that mess I ran into a private bus operator who offered me to take to my destination for 300 bucks more than what the govt bus would take and foolishly I agreed because the wish to be in Mecleoganj kept getting stronger and stronger.

A chaos of inconvenience came up when they started fitting extra passengers in the bus as if we were goats and sheep ready to be herded. Some passengers refused to go and I joined them and left back for Kashmere Gate to take my money back from them and decided that I’ll travel via Pathankot.

The moment I entered Kashmere Gate bus stand I saw a an empty bus going to Dharamshala on the stand. Tears of joy rolled on my eyes as if the bus was sent by the gods. For someone who was willing to spend 1000 bucks for Dharamshala was now going to reach for half the price was a god gift.

I was going to Mecloedganj.