You’ll ask me if this is a review. I’ll tell you yes, but then you’ll wonder why I don’t call it a review then. Because if Transformers according to me is not a movie then how can this post be a review.

Anyways, it was my badluck that despite all warnings and self-pledge that I won’t be watching this childhood ruining garbage that calls itself Transformers and is nothing like what Transformers have been in my mind. I grew up watching Transformers, the classic series on Toonami, Cartoon Network. After that Michael Bay dropped in with this shitfest called Transformers franchise and even after bearing three movies I was relieved with the rumors that there won’t be another explosion fest in this series.

Well my expectations were ruined when Trans4mers was announced. I was destroyed, I was ruined and then the movie released and I was forced to join my friends for this movie.

So how was it, it was brilliant. I was the most brilliant kind of shitty filmmaking and storytelling I have ever seen in my life. I can go on and on about the number of flaws that this movie carries. Let’s start from there is a group of Human mercenaries slash government agents who are killing the transformers. The giant robots show up for barely 20% in the entire movie and it is all about bunch of humans, a hot supermodel teenager running in half naked and her protective father. The movie begins with a spaceship turning dinosaurs into metal ones and the entire sequence takes place for no reason because that is not how Dinobots originated.

Yes there are Dinobots in the movie, who show up for 15 minutes and were publicized as the main cast in the film. Anyways the movie revolves around Cade who finds Optimus Prime hiding in a theater, don’t even begin to ask how he entered the theater in the first place because it is a Michael Bay movie and you are not supposed to ask questions. Optimus Prime is dead like he dies in all three movies only that he is dead since the beginning of this film. 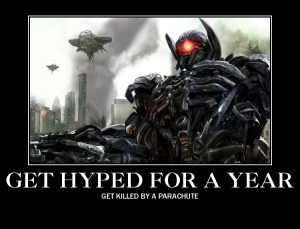 We also have Lockdown as the main antagonist of the film and as usual Megatron has no idea that whatever the fuck he is doing in the film and evolves to Galvatron because of a government experiment and goes bonkers. There are members of Autobots and from Lockdown’s army who have beard, fat belly and Lockdown himself looks like a ghetto rapper from the 90s without a cap and an extra-large t-shirt.

The weirdest part of this film is when Cade accuses Tessa’s boyfriend of rape he brings a paper showing that law in Texas says that it is totally legal for minors to have sex with people within three year gap of age. He is carrying those papers so that he doesn’t get arrested of rape. I MEAN HOLY SHIT!!!! I accept that this version of Transformers is still less racist, less misogynistic but this entire sequence is so fucking weird and fucked up.

Anyways, there is a lot of improvements compared to last three movies and finally reveals that Transformers are made of something called Transformium. There is an evil organization that is making Transformers of their own. Optimus Prime finally realizes that humans are evil and finally he wants to kill them and flee the planet. Good god it took him 3 movies to realize this.

The rest of movie makes no sense and turns into a giant crapfest. Lot of explosions follow and Dinobotts show up finally for 15 minutes. Grimlock gets punched by Optimus Prime and after destroying a lot of things around they just disappear.

The movie is shit, direction is shitter, the story improves but is still a shitfest.

Yet the movie is set to make 1.2bn at box office and there is no hope left in this world. Michael Bay is coming with Ninja Turtles movie later this year, another reason to get hopeless about another childhood character getting destroyed.