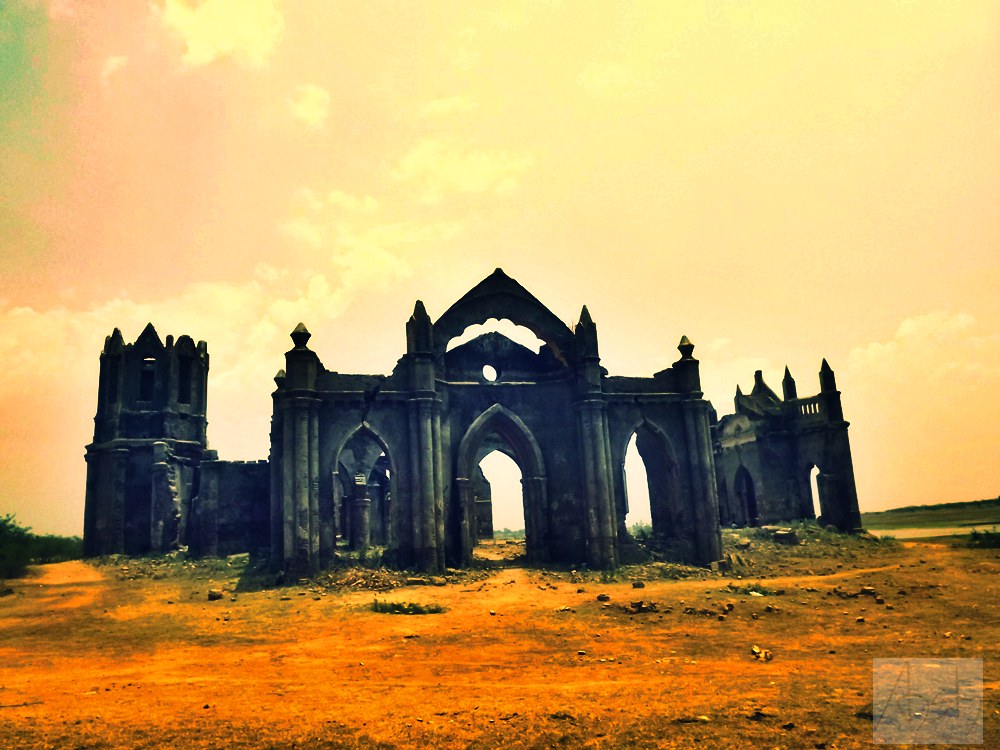 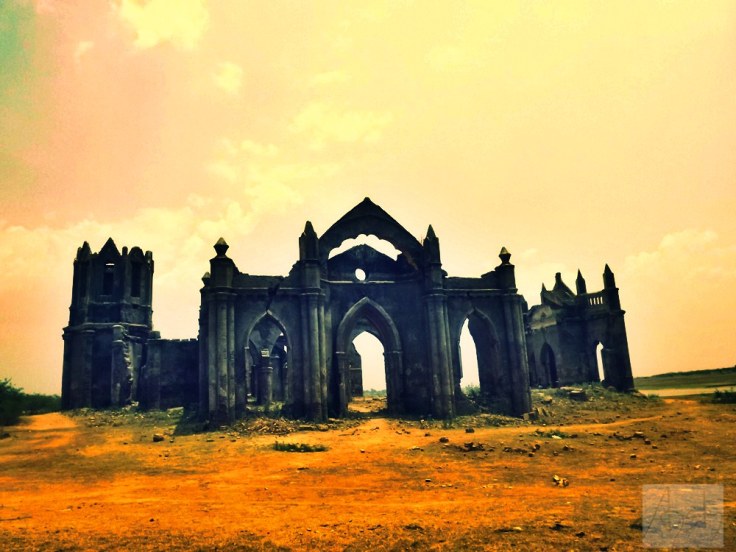 After Shimoga I took a late night bus for Hassan. This city was not in my travel plans but the more I went through the internet and information it made me sure that this place was worth visiting. There were few temples from Hoysala era, an abandoned church and a huge statue of bahubali that was visited by Jain pilgrims from all around the country.

At 4 in the morning I reached Hassan. The weather was colder than that of Shimoga, Coorg starts after a few hour bus journey from here. Hassan is the last train stop before Coorg after which a road journey begins. I was going to visit Channakesava temple in Belur but the first bus was around 6:30 so I had no other choice than to spend time at this bus stop. 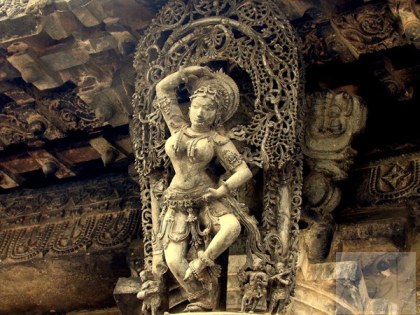 At 6:30 I got on a bus going to Belur that reached my destination after some 40 minutes. As per tradition I was again going to miss my stop but this time I asked and got off the bus in time. From bus stand I took a walk for Channakesava temple that was supposed to open at 8 AM. The temple complex was filled with pilgrims that once the gates opened seemed to be vanished in the huge courtyard of the temple. This is one of the main temples built by the Hoysala rulers and it took some 100 years for the entire temple complex to be finished. Oh, and those laddus for 50 rs each inside the temple were a treat. 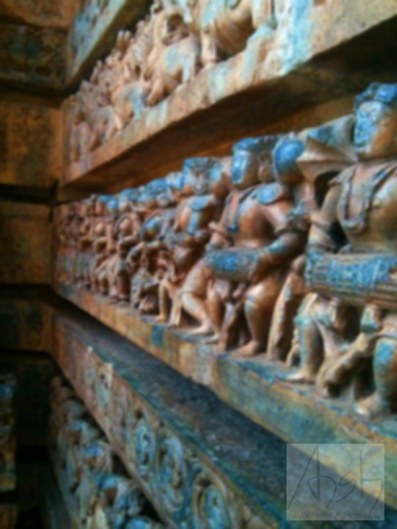 After here I walked back to the bus stand, it was started to get a bit hotter and I was unable to find a bus for Halebidu another Hoysala landmark. The temple is literally called Hoysaleshwara temple. It was a barefeet walk on the stone. This temple complex being smaller than Channakesava’s complex was still full of beautiful designs on the walls from inside out. This temple is dedicated to Lord Shiva has more detailed carvings than many Hoysala temples found all around Karnataka. 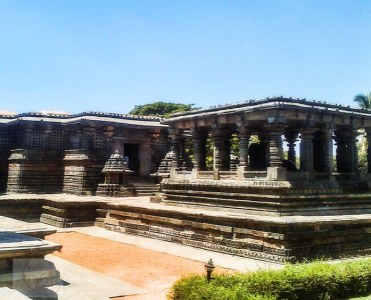 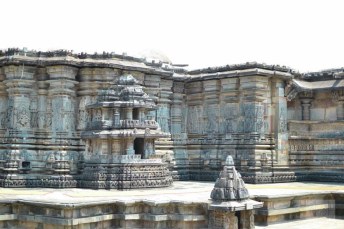 It was already around 10:30, a guide told me to take a bus for Shravanbelagola for which I had to return to Hassan (although I am not sure if everyone has to do this but for me being a solo traveler I just trusted my instincts.) I took a bus for Hassan that dropped me at the bus stand, surprisingly it took less time to reach Hassan from here than it took to reach Hassan from Belur. 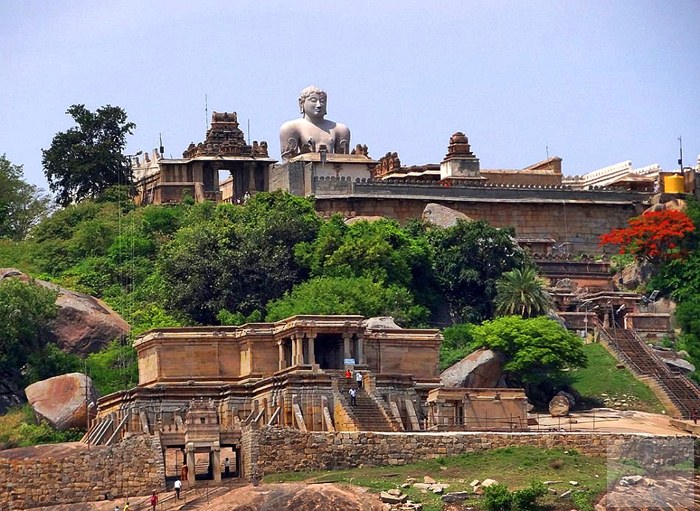 Finally around 1 pm in afternoon I reached Shravanbelagola, I was sleepy and tired. I was forcing myself to keep my eyes opened so that I don’t miss my stops. This town is one of the most important sites for Jain pilgrims and it takes some 600 steps to climb on the top. All of a sudden it started raining in my way, clouds came out of nowhere and in minutes my tiredness was gone. There is a carriage service here that carries elderly visitors by help of 3 for men.

I took a bus for Hassan, my final destination was still waiting. This was the most confusing part of my travel. I was supposed to visit Shettyhalli and the confusion was that there were two buses going to two different Shettyhallis. One was Shettyhalli and another was Shetty Halli. I asked people around, showing them pictures of the old church and finally got in the bus for Shettyhalli. After a bumpy bus ride that took my out of Hassan to the villages and the countryside filled with farms on both sides I reached my stop. I had to ask around for the old church and realized that it was some 5 kilometers away from the village. I started walking but soon I found lift on a tractor that dropped me by the riverside where the church was located. 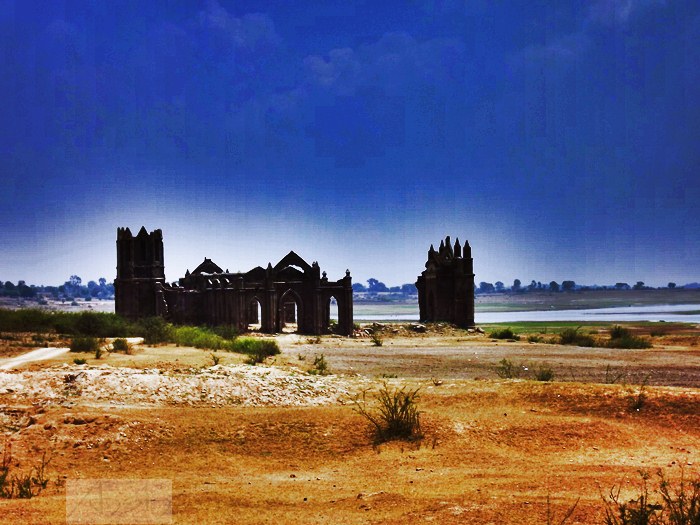 Every year when it rains and the river’s water level rises this church is drowned in the water, after flood goes back it emerges again out of the water. The church is in ruins but still is a beautiful place to hang around. The river itself is one amazing place to sit by and watch the sun go down in evening. I took lift in the same tractor going back and returned to the village, took a bus and returned to Hassan then took a train going to Bangalore and hence another stage of my trip ended.

I will write about these places in a bit more detail, especially about Shettyhalli church. For now there was another destination I was supposed to travel to.