Next morning my thumb healed to a large extent. I woke up early morning and checked out the hotel. I was supposed to travel to Goa early morning but instead I decided to take a walk around the city.

Karwar is the city where Ravindra Nath Tagore wrote Prakritir Pratishodha, Nature’s Revenge. He described Karwar as “The sea beach of Karwar is certainly a fit place in which to realize that the beauty of Nature is not a mirage of the imagination, but reflects the joy of the Infinite and thus draws us to lose ourselves in it. Where the universe is expressing itself in the magic of its laws it may not be strange if we miss its infinitude; but where the heart gets into immediate touch with immensity in the beauty of the meanest of things, is any room left for argument?”

Looking at the beauty and peace that this place offers, this city can inspire anyone to write. At first I was not in a mood to take an auto straight to the beach to I walked around. I reached Karwar Fish Market that was crowded and busy as if everyone from this city was here. 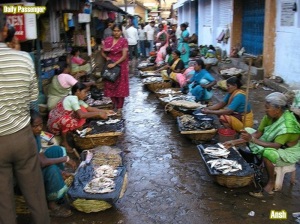 After walking for a bit more the beach was nowhere to be found. I had to take an autorikshaw that charged me 100 rs for Tagore beach that I think was slightly more than required. Anyways there was no time to feel cheated because ahead of me was amazing sight. Tagore beach looked glorious. This beach unlike Gokarna was less rocky and was filled with Coconut Grooves. 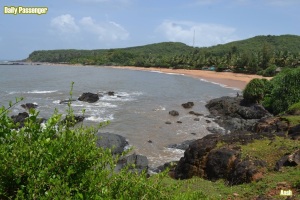 There are boats that offer quick tour to nearby islands but as I was restricted on time I was unable to visit any. I spoke to few locals who told me that nearby beaches offer a lot of adventure sports like zorbing and kayaking along with trekking and climbing as well. The resorts here normally include this in their package while other charge additional amount for it.

I wanted to stay but I had no choice, I returned to city bus stop and took a bus to railway station again, this place as I told earlier looks like appeared out of some book like A Village by the Sea or Malgudi days it was that beautiful. It was around 11 and train was supposed to come at 3, it was better for me to take a bus rather than waste entire day here.

Back to bus stand I took the first bus going to Madgaon and hopped right into it for another journey.